Australians have had a long love affair with downlights – they have adorned the ceilings of thousands of renovated inner urban terrace houses, apartments, bungalows and mansions across our country. Building Knowledge’s building scientist Jesse Clarke says this modern fascination with ‘clean lines’ may well be a design trend with unseen consequences.

In recent decades Australians have become world leaders in quickly adopting and introducing new technologies that make our home life that much smarter amd simpler. From the 1960s onwards our love affair with the clean design and crispness that downlights lend to living areas has continued unabated, despite the occasional safety and efficiency issues faced by any new electrical hardware.

CSR House research suggested recently that downlights can nonetheless be ‘weak points’ in our efforts to control moisture, heat and the movement of warm air in our houses.

Typically about 20 per cent of the air entering a house leaves via its roof space, increasing the risk of condensation in the roof space and reducing the energy efficiency of the roof.

The ceiling contains gaps, such as around roof space hatches and service penetrations, which provide routes for air to flow from the occupied space into the roof space.

There are also more complex airflow routes: for example, through wall cavities and behind lining systems. Heat and moisture are generated by the normal activities of the household within the occupied space of the house below the ceiling, raising the temperature and vapour pressure above ambient conditions outside. Some of this heat and moisture leaves the living area of the house, passing through the ceiling into the roof space by a combination of conduction, diffusion and air movement.

In cooler climates this movement contributes significantly to heat loss from the house and also leads to a risk of condensation within the roof space. Reducing the airflow through the ceiling as far as practical will both save energy and reduce the risk of condensation. Even in warm tropical climates moisture sources within the house can add to the overall water vapour content in the internal air: showering, cooking, washing machines, drying clothes, and non-flued gas heaters all generate water vapour.

The warm moist air will want to rise creating upward pressure on the down lights as shown in Figure A. 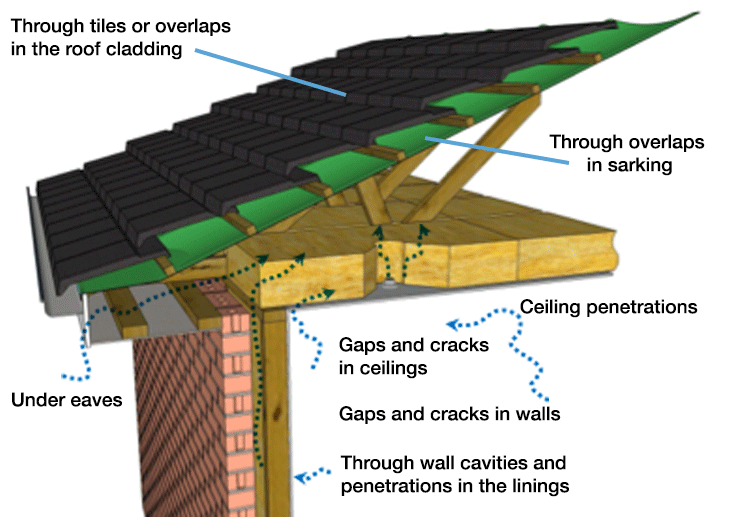 Figure A How moisture travels into the roof space

About 20 per cent of the air entering a roof space comes through the ceiling from below. Air passes from the occupied spaces of a house into the roof space by a variety of routes.

Some of these can be readily identified and sealed including:

In the United Kingdom, the air leakage around a number of types of downlights has been measured as a function of pressure difference. The results show that there is a very large variation of air leakage rates.

Models that have an International Protection (IP) rating of 60 – 65 are generally sufficiently airtight. However, other ratings, such as IP44, can produce widely differing results. For instance, downlights where the light beam can be angled (e.g. swivel or tilt types) are usually excessively leaky unless additional sealing measures are taken.

Models which have even lower IP20 ratings are in common use in Australia. In Figure 10 below an air leakage factor of 1 is representative of a typical unsealed ceiling with tiltable downlights, resulting in 70 grams per hour of moisture transferring into the roof space.

By reducing the percentage of air leakage through the ceiling using better sealed downlights or even better, no downlights at all, the moisture movement by airflow can be reduced by as much as 80 per cent, greatly reducing the risk of condensation in the roof space.

Figure 10 Heat and moisture flows from living areas to the loft space as a function of ceiling air leakage where a typical unsealed ceiling has a leakage factor of 1.0 Source:2006 BRE Energy Loss and Condensation Risk

Other airflow routes are more complex, for example:

In summary, our recent CSR House research suggests that downlights can definitely be considered ‘weak points’ in:

As important to bear in mind is that fixed LED downlights with a minimum of IP44 rating will generally have better sealing around the flanges and will prevent excess air and moisture transfer between the living space and the roof space reducing the potential for roof space condensation.

These are certainly preferred options if the cool, crisp aesthetic of downlights is to remain an essential design consideration in Australian homes. 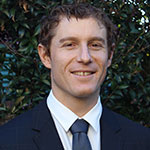