It should be no surprise to energy observers that solar generation on commercial properties is becoming mainstream.

In July this year 20 per cent of the total rebates generated for solar in Australia came via commercial installations, with most of that originating from systems between 30kW-100kW.

Residentially focused rebates and tariffs have wound down in recent years, concurrent with the rise of energy supply and network costs and a significant reduction in the cost of solar equipment and installation labour.

In a radical departure from the traditionally domestic market, commercial solar is creating challenges for those considering investment, particularly as the complexities of system design and installation such as system sizing, technical, compliance, grid connection et cetera also change – and as the language around purchasing changes to one of commercial investment –capital expenditure, ROI etc.

Unfortunately, having grown up in the domestic solar market few solar suppliers understand these changes to commercial investment and language; and fewer still have the engineering and project management capability to design and deliver a complex electrical infrastructure upgrade like a commercial solar installation.

The key to solar design for commercial properties is to work within a site’s consumption curve – seeking to design a system that will only off-set consumption (controlling feed into the grid).

This is done by analysing the site’s demonstrated energy profile (reliable historical analysis, ideally at the smart meter level) and understanding what the business does – its operational hours and business type. Tariffs, rates, supply versus network ratios and kWh consumed all play a key role in designing the right system.

Very few businesses can offset their total energy usage through solar generation alone, but it is possible to offset up to 80-90% of business hour usage through the right design methodology.

Controlling feed-in to the grid

Feeding energy to the grid (also known as exporting energy) is the new bastion of regulation by energy supply authorities and providers.

This is for good reason: the huge influx in solar installations in commercial and industrial areas (usually concentrated around sales and marketing campaigns) is creating worrying levels of energy feed into the grid.

Consider industrial estates with several hundred kW of solar installed, and no-one working during the weekends – this is a lot of solar energy moving out of a site and into the grid, causing voltage rise and damage to the ‘poles and wires’ (transformers and sub-stations).

Even the most perfectly design system (for a business’s operational hours) can create feed-in at different times of the year. Consider the following example – same site, different days of the week: 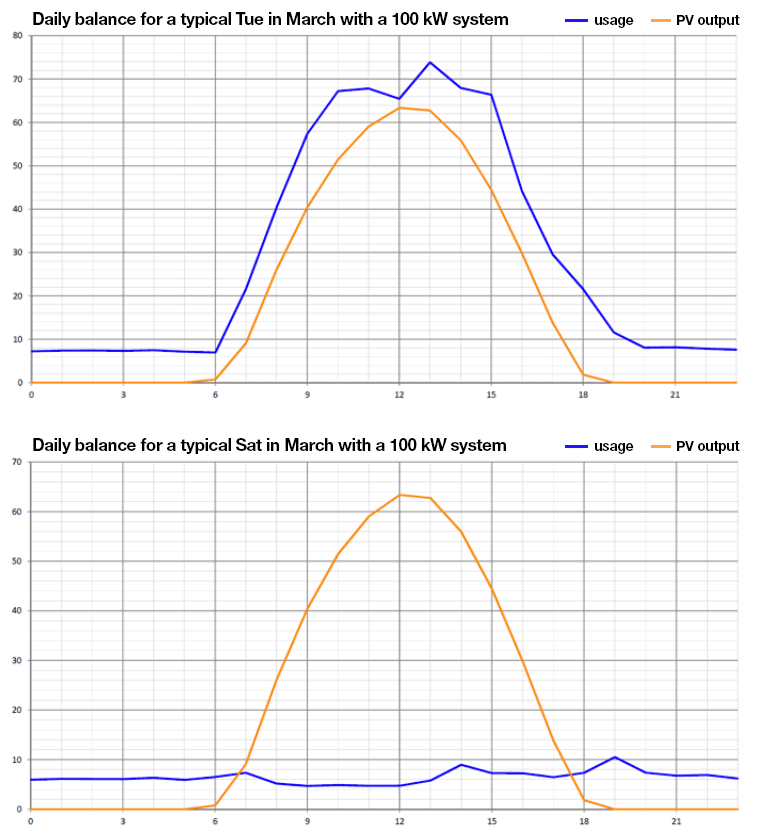 This area of solar connection (connection of solar systems to the local grid network) is increasingly under scrutiny, with Queensland already tightening its ruling around grid connection and feed in: specifically, if your system has the appropriate hardware to control export to the grid, your connection pre-approval will likely be successful.

This aspect of solar design is critical, and should form the first steps in any solar design.

The structural impact of solar on most commercial buildings 25-30 years old or less is negligible. Most buildings simply don’t require their entire roof filled, and those that do are big enough to have the right structural integrity in place already.

Solar generation on commercial buildings will only continue to expand, eventually being expected on all new builds.

Energy load forecasting is usually carried out during a building’s early stages, thus allowing some level of solar design assessment – given there is no historical data to work from for a new building.

If applied at the right time of the building’s life (during the concept, design or architectural stages) there are functional and cost reduction benefits for making the building ‘solar ready.’

The storage situation is developing rapidly as battery storage sees the same commercialisation that solar PV has in recent years – technology innovation, increased market uptake, reduced manufacturing costs and the related economies of scale – that will drive price down arguably within the decade and suddenly shift the investment scenario for battery storage in commercial buildings.