Much has been said in recent years about the benefits of thermal mass in building. Scott Clarkson sheds some light on whether too much can help or hinder building performance, with thanks to FWPA.

Like our bodies, building materials have the ability to absorb, store and release large amounts of thermal energy without altering their temperature greatly. We refer to this capability as thermal mass and, if used correctly, it can provide an effective means of moderating daily temperature changes, greatly reducing the need for artificial heating and cooling.

However, there can always be too much of a good thing. Although design guides and legislation encourage the incorporation of thermal mass to enhance thermal comfort in homes and buildings, there is actually little quantified information to help designers calculate how much mass is needed.

Too much thermal mass can actually reduce thermal comfort and increase energy usage. Because the manufacture of high thermal mass material often comes at a high environmental cost, and especially if a building’s lifespan is short, it’s quite possible that the energy saved can be significantly less than the energy invested in the thermal mass.

It’s important to recognise the variables that influence how thermal mass can be effectively used. The quantity of mass that is useful in a building will depend on key factors such as the local climate, the size and occupation patterns of the building, the environmental design strategy employed, and even the size of windows. Understanding how much thermal mass should be included in a building is important enough, but it’s even more important to understand how to use it in relation to all these factors.

Knowing how thermal energy is transferred helps us determine how to use it. Just like the human body, thermal environments transfer energy through radiation, conduction and convection.

Interior surfaces such as walls, ceilings and floors exchange thermal energy by radiation. If the surface is at a higher temperature than the surface of the body, then radiant energy is received from it, giving the sensation of warmth. Thermal mass is also activated via contact with the air, through convection. If the surface temperature of the mass is higher than the air, for example in the evening, then the mass will warm the air. This can be encouraged through the correct use of ventilation.

Direct contact – conduction – provides another means of transferring thermal energy. When the human body is in contact with a surface that is cooler than the body’s skin, thermal energy will be conducted away from the skin into the surface, particularly if the material is a good conductor (as dense materials are). 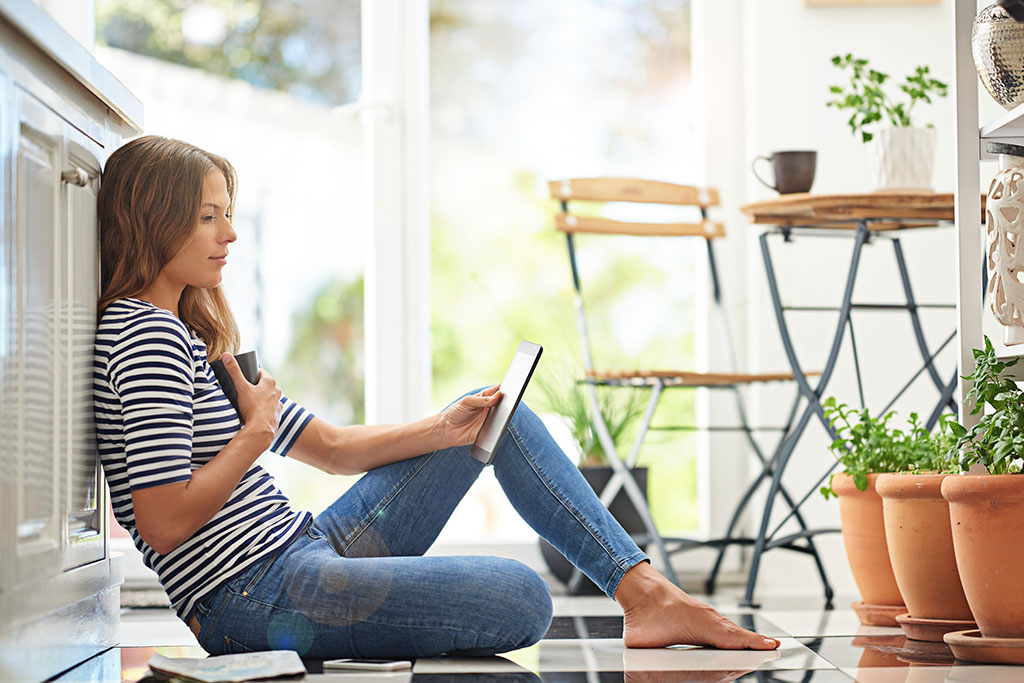 In summer, thermal mass is used to keep a space cool by absorbing thermal energy from the air primarily by conduction. Warm air rises above the cooler air, and so the warmest air is always found near the ceiling, and the coolest near the floor. Thermal mass should therefore be placed where the warmest air is, near the walls or ceilings, so it can absorb the most amount of energy.

When thermal mass is used to absorb excess thermal energy to keep a space cool, the mass must be allowed to cool down again so that it has the capacity to absorb more thermal energy the next day. In a passive system this is done by ventilating the space with cool evening and night breezes, occasionally helped by some mechanical ventilation. This strategy is often called night purging.

This strategy relies on ventilation being controlled, meaning that the occupant should choose when – and when not – to ventilate. This means minimising leakage through gaps around windows and doors so air outside that is uncomfortably warm or cool is prevented from entering the building. The standard 10mm tolerance gap around a 1m x 1m window frame is equivalent to a hole in the wall of 200mm x 200mm, such gaps should be filled and sealed during construction.

Ventilation openings should be placed on opposite sides of the room to encourage cross ventilation, or alternatively, a roof ventilator can be used. The most effective air speed for cooling a room is between 1.5–2 metres per second; air transfers less energy above and below these speeds.

Especially in Australian climates, window size is extremely important in determining the energy efficiency of a space. Windows are naturally poor insulators, and can both allow thermal energy to escape, and let in unwanted heat. Windows larger than 30% of floor area receiving direct sun, and which are not fully shaded between the spring and autumn equinoxes, reduce efficiency. The desired balance between the size of the window and the quantity of thermal mass is dependent on the local climate, but other factors will also influence the size and proportions of the window in a space, such as the orientation to the sun and shading.

But the effect of the local climate is perhaps the most important thing to consider when incorporating thermal mass in a building. Australia is an enormous country with a vast range of climates, building practices must cater to the diverse effects these climates can hold. Different climates will have different heating or cooling priorities and a particular passive solar design feature might work in Sydney but not in Darwin or Brisbane for example.

Thermal mass provides a useful contribution to regulating the extremes in climate, but it’s important to remember that thermal mass always needs to be heated up, whether or not it is hot and sunny outside. More mass will either make no difference or reduce the energy efficiency of a space, since it will require extra energy to warm it up when free ‘environmental’ energy (such as the sun) is not available.

On the other hand, high levels of mass can help to keep a building cool during a heat wave, but the same mass can then take several days to cool down, creating discomfort when the heat wave passes and the air temperature returns to something more pleasant. This problem can even happen on a daily cycle where the house stays warmer than desired in the evening because there is too much heat stored in the mass. Controlled ventilation and careful placement of thermal mass in relation to the demands of the local climate can help ameliorate these shortcomings.

Thermal energy, when used correctly, yields optimal results in regards to both thermal comfort and energy efficiency. However, it is important to be aware of the misconception that more thermal mass provides better climate control. It’s not so much a case of how much you have, but what you do with it. Designing specifically for the demands of the local climate, utilizing effective ventilation and being aware of the effects of window sizes, are all considerations that will impact the efficiency of thermal energy in your building plans.